The Physics of Computation Conference 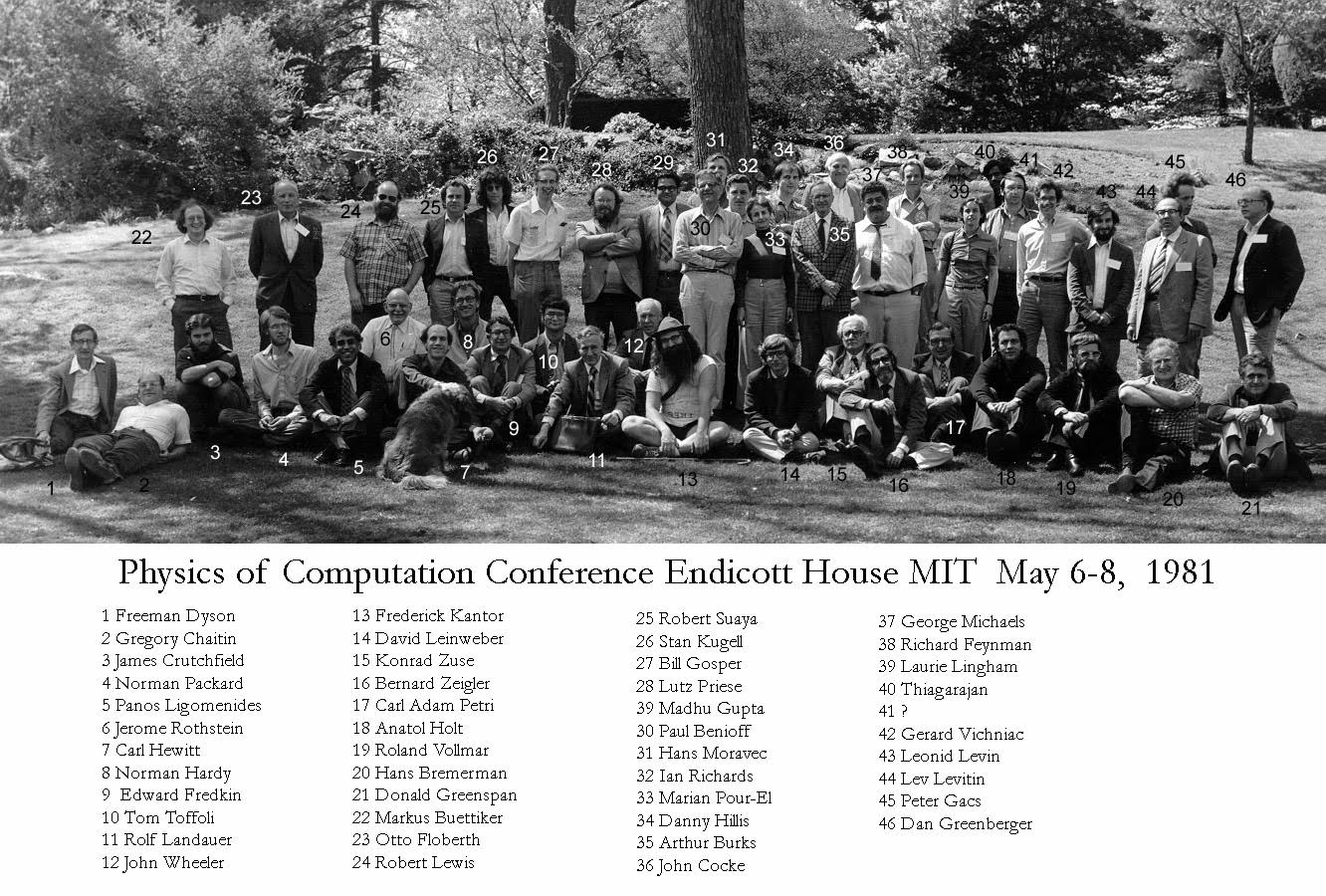 You may have heard of Dr. Freeman Dyson, the British physicist and mathematician— the fellow who predicted that advanced civilizations might construct a shell around their nearest star to harvest its energy (aka “the Dyson Sphere”). At age five he was busy calculating the number of atoms in the sun.

Or John Archibald Wheeler, the American theoretical physicist, Manhattan Project participant and nuclear reactor designer. Modern physics continues to use terms he coined, like “quantum foam,” “wormhole,” and “it from bit.”

Wheeler’s student Richard Feynman was also one of those rare scientists who became a household name by way of his aptitude for publishing popular books and publicly lecturing on topics like nanotechnology as early as 1959. He’s known today as one of the fathers of the study of quantum physics.

Levin was a Russian-born genius who still teaches computer science at Boston University.

Norman Packard was a founding member of the “Eudaemons,” who developed a toe-operated computer that gave roulette players a statistical advantage over the casino house. He works in data analysis and predictive technologies today.

Arthur Burks met and married an actual human computer, Alice Rowe, in the mid 1940’s. He worked on the ENIAC machine and taught at the University of Michigan.

David Leinweber played a role in the merging of computing and share markets. In one satirical piece, he demonstrated the difficulty of predicting markets by demonstrating a spurious “correlation” between the S&P 500’s movements and butter production in Bangladesh.

Carl Adam Petri was from Germany, fought for the Wehrmacht and ended up a in a British POW camp. Before the war at age 15 he was inspired to build his own analog computer. Is your computer part of a network? Dr. Petri helped make it a reality. 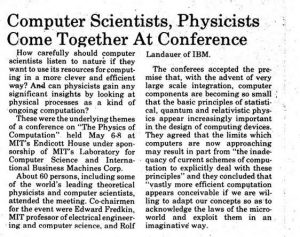 Edward Fredkin, a co-chair of the conference, has taught and researched at MIT, Caltech and Boston University. There’s logical paradox named after him having to do with the dynamics of choosing between two equally attractive options. He now researches something called “pancomputationalism.”

In the summer of 1981, these men and about 50 others met at the historic MIT Endicott House for three days of discussion about the possibility of taking cues from the natural world when tackling the problems of designing ever more powerful and efficient ways of computing. Sponsored by IBM and MIT’s Laboratory for Computer Science, the gathered minds wondered if they could gain insight from the idea that physical processes might operate like a universe-sized ongoing computation.

At the Physics of Computation Conference, attendees debated the limitations and possibilities brought about by the continual shrinking of actual computer components. Many of their conclusions have led straight to today’s science headlines, like “REVOLUTIONARY QUANTUM COMPUTER IS ONE STEP CLOSER TO REALITY AFTER MAJOR BREAKTHROUGH” (Newsweek, 3/8/2018).

A Setting For Success

Read more about what makes Endicott House a special venue.

What better place to ponder the connections between nature and technology than the Mansion’s Frederick Law Olmsted-influenced grounds?

Another creative genius, landscape designer Frederick Law Olmsted, theorized that carefully planned natural environments can serve as truly superlative spaces for inspiration. Scenery, he concluded, has a cumulative and unconscious effect on the viewer that produces a relaxing or unfurling effect on the faculties. Unlike his contemporaries, Olmsted rejected garden designs based on ornamental or contrived geometric elements, preferring rather to eliminate visual distractions and demands on conscious thought. Instead of impressing the observer with visual fireworks, Olmsted’s aim was to evoke the hypnotic utility of a campfire as an invitation to reflect.

Through the years, the MIT Endicott House has played host to meetings and conferences that have influenced the future of events in our small Dedham, Massachusetts community, our state, country and indeed the entire planet. Remember learning social studies in your grade school years? In June of 1962, the Endicott House hosted a Kennedy Administration school reform study group that sought to sharpen America’s focus on the teaching of the humanities- social studies and English- in public schools.

“For many years, I assigned a project to my undergraduate students in architecture to design a build a structure to keep the rain, cold and wind out while sleeping over for the night. Endicott was the perfect place to do this.They slept the night in their structures and early in the morning had breakfast. This taught them that design is important, but testing with the elements was most important. Of all the exercises I gave, this one has always been a highlight of the semester. Without the staff of Endicott and the beautiful setting, I would not have been able to give out this exciting assignment. Additionally, I have been at conferences of my department hosted at Endicott, the perfect place to get away from the urban setting of MIT and experience the beautiful setting of Endicott. This is true either in fall, winter or spring. Endicott has always been a special place for conferences.”

The MIT Endicott House, with its historic and inspirational surroundings, is ready to host your meeting, conference or retreat. True, we host of lot of scientist-types here at MIT, but we are also famous for our summer outings and themed dinner offerings! See our Meeting Packages for details on our location for your next world-changing get-together.