Endicott House in the News

When was the last time you said YES to something spontaneous? MIT student Tafsia Shikdar has some advice for you: 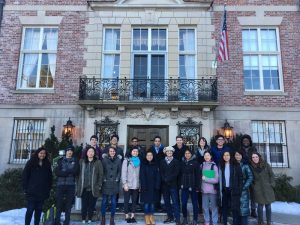 She affirms the power of saying yes in her article published in MIT’s news outlet The Tech, after participating in a retreat at the Endicott House called Get Clued In 2018. It’s a new event aimed at helping Freshmen at MIT prepare for life as part of our unique community. Read about her adventures at the Endicott House here.

In other news, the MIT Technology Review published a story recently that outlines the current state of affairs of quantum computing. In his piece “Quantum computers are finally here. What are we going to do with them?” author Will Knight guides the reader on a journey through the long development of quantum computing from its beginnings in the 1970’s to today’s questions about how they can be applied to practical purposes.

In the summer of 1981, IBM and MIT organized a landmark event called the First Conference on the Physics of Computation. It took place at Endicott House, a French-style mansion not far from the MIT campus.

The Endicott House played a role in the story, hosting a crucial scientific gathering known as the First Conference on the Physics of Computation in the summer of 1981. In attendance were current researcher Charles Bennett, Konrad Zuse, inventor of the first programmable computer and famous quantum physicist Richard Feynman. It was Feynman’s keynote address on the application of quantum effects to computing that gave the field its first major boost.

MIT’s Endicott House is proud to be part of the history of the school’s contributions to science and technology, whether it’s helping students feel more connected, or providing the space for major advancements in new science. We’re humbled by the opportunity to serve so many groups that need a beautiful place to gather and plan their next steps.

When you contact our wonderful event staff, we’re always looking for ways to say YES to making your getaway as miraculous as possible!